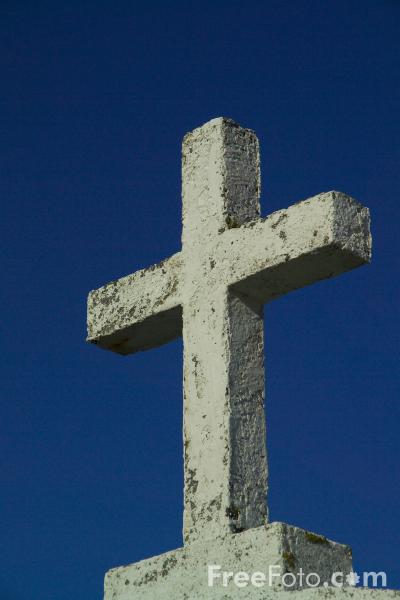 Every religion has its own symbol. The Lotus flower was first used by the Egyptians and the ancient Chinese and Indians but is now mostly associated with Buddhism.  Its wheel shape depicts the circle of birth and death, and beauty and harmony emerging out of muddy water.  Ancient Judaism was scared stiff to have a symbol and avoided having one for fear of breaking the second commandment, but these days the modern Jewish nation has the Star of David.  Its hexagon shape represents God’s promise to David that his kingdom would last forever and that the Messiah would come from his line.  Islam has got the Cresent, depicting the moon, and Christianity has the cross.  The cross is now the universal symbol of Christianity.

But why the cross?  Why focus on the cross.  Jesus rose from the dead and went to heaven.  If you’re a Christian why wouldn’t you have an empty tomb as a symbol?  Or Jesus ascending to heaven?  Or what about the miracles?  Maybe there should have been more emphasis on Jesus’s miraculous powers.  Maybe a wave seeing that he commanded and walked on a few.  Or because he was God who came down as man we should have focused on him as the carpenter.  Maybe a hammer or chisel could have been the symbol. But why the cross? Why focus on his death and crucifixion?

Let’s think about it: why would you choose to remember as your symbol the time your God went through the most humiliating, embarrassing time of his short life?  Now when it comes to the Roman Empire, these guys were absolute guns at creating methods of execution.  They built a stadium for it and it still stands there today (barely).  Crucifixion which was a death only reserved for the dodgiest of people, was the cruelest method ever invented of execution for it delayed the death for maximum torture.  First stripping you naked, you could be up there for days before you died, having bird’s pecking your eyes out and pecking at your flesh.  Gross.  But that’s the reality.  They gave you a little bit of timber for you to hold your weight a bit so the nails wouldn’t tear through your flesh and you’d fall off and have to be re-nailed.  Such is the reality of Crucifixion.  But this is what Jesus Christ the Messiah and Son of God went through.  Why would his followers want to remember that and have that as the universal symbol?

Why choose this horrific event as thing we symbolize Christianity for?  Because the centrality of the cross originated in the mind of Jesus himself. He was a guy who from a young age knew his own fate.  From the time he was a youngster sitting in his “father’s house” hanging out with the teachers in the temple, he knew he had a mission.  His father had sent him into the world for a purpose.  He had one mission only he could do; this purpose only he could go through.  But only he and God knew about it.  Even his followers had no idea what his mission was.  Jesus tells Peter plain as day what is going to happen to him and Jesus turns around and says get away from me Satan.  In the upper room over the last supper the followers had no clue what was about to happen to him even after it was confirmed to them.  I am going to die tonight fellas. Huh?  Meanwhile, Andrew to Thomas: “Thomas can you please pass the salt.”  They had no idea.

So why did he have to die?  Why was his mission to die?  I might give four solid reasons.

He did it for our sake and not his own and believed that by dying, he would secure the good which could not be secured in any other way.  He was the Good Shepherd who was going to lay down his life for his sheep for their benefit.  In the upper room he showed this as well by the Lord ’s Supper picture “this is my body given for you’.

Our reconciliation with God.  We stuffed up and are separated from God.  It was only through his sacrifice in that we can come to the Father.  We are saved through his death.

Our sins are the roadblock that stopped us from having the gift he wanted to give us so they had to be removed so we could receive it.  So in Jesus’ death he took away our sins.  He died so that his sacrifice would be a once off payment for the humanity of the world, wiping away all their wrongs.

The wages of sin is death (Romans 6:23). The reality is we deserve death.  We are born with a sin inside that needs to be dealt with.  I know that sucks, but that’s the fact.  We are not all good people who do a few bad things.  We are wretched people who need saving.  When we say, I can do life my own way, I will do what I want to do, we have offended God in the most shocking way by saying “thanks for creating me, now get nicked”.  We are sinners and we deserve death and death is the final judgement for our rebellion towards God.  It is what we deserve.  But Jesus became our sin offering and died our death, the death we deserve so that we can live with him eternally.

So who cares about the cross?  All humanity should.  To have the Son of God come down as man, so that man can be sons of God is the greatest act of love.  To have a God who would send his Son to die for your benefit, to bring you into relationship with him for eternity, to pay for the sins that you committed, and die the death you deserve, a God who would die a death in the most cruel, torturous way for you.  Now there is a God who must love you and treasure you as his most precious possession.  A God who must really want to know you and be in relationship with.

Who cares about the cross?

Flooding Creek Community Church is a group of people seeking to know Jesus. We live in Sale, in Gippsland, Victoria.